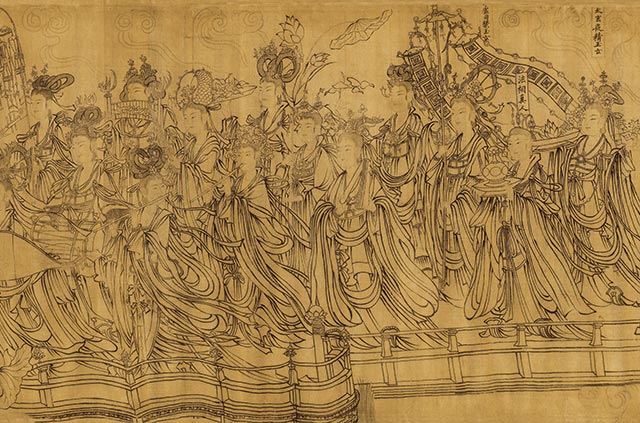 The painting depicts a procession of Daoist gods, with deities of the highest rank making their way to pay homage to the “primordial,” or Dao. In the painting, celestial generals open the way, with the emperor wearing a halo among them. Numerous other gods and goddesses hold banners and umbrellas attending to the emperor, marching from right to left. Although there are numerous characters in the painting, it is not at all chaotic. Its lines are smooth and the clothing flows, fluttering in the wind as if the gods truly float on air. The figures are in high spirits, each with a different bearing and wearing different headgear and guards of honor, thoroughly expressing the majesty of the emperor, the might of the celestial generals, and the grace of the fairies.

Wu Zongyuan (d. 1050), known by the alias Wu Dao, was a Northern Song Dynasty painter from Baibo in Henan (now Luoyang in Jili, Henan Province). He attained the rank of vice president of the Bureau of Parks, Lakes, and Mountains. Specializing in figure painting, he worked in the style of Wu Daozi, employing similar smooth brushstrokes. He was commissioned to produce numerous murals for temples in Kaifeng and Luoyang.