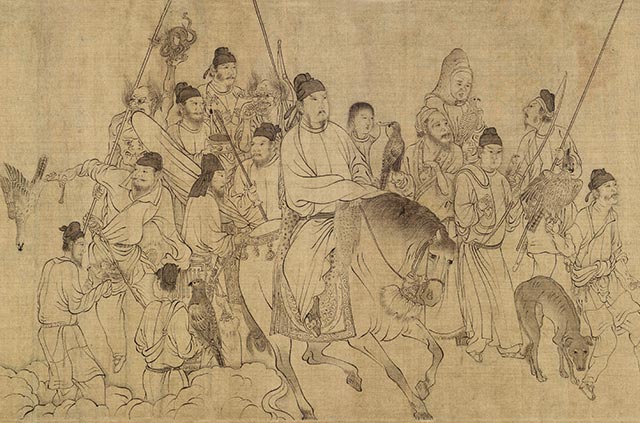 This painting depicts the hunting trip of a feudal noble (one of the Great Immortals) with his household and servants. The first section shows how falcons and hounds clear the way for the noble and his entourage. The later sections go on to portray the retinue accompanying the figures, including the meticulously depicted sedans and carriages used by the female family members. Each detail of the luxurious well-equipped vehicles is recorded, as well as the elegant procession that displays the nobleman’s wealth.

The line drawing style in Chinese paintings involves the use of lines and different shades of ink to depict an item. It is regarded as the most unusual yet simple technique in Chinese painting. Li’s line drawing style serves as a template for later generations, and some have even compared his outstanding technique to “the supreme dragon.” His legacy has been passed down over the generations.

Li Gonglin (1049–1106), also known by aliases including Boshi and Jushi, was a painter of the Northern Song Dynasty. Born in Shuzhou (present day Shucheng, Anhui Province), Li was erudite, excelling in the composition of poems and identification of antiques. He was renowned for his paintings, which encompassed various themes, including figure paintings, Buddhist and Daoist religious images, horses, landscapes, and bird and flower paintings. Because he excelled in so many traditional themes of Chinese painting, he was known in his own times as the First Great Painter of the Northern Song Dynasty.