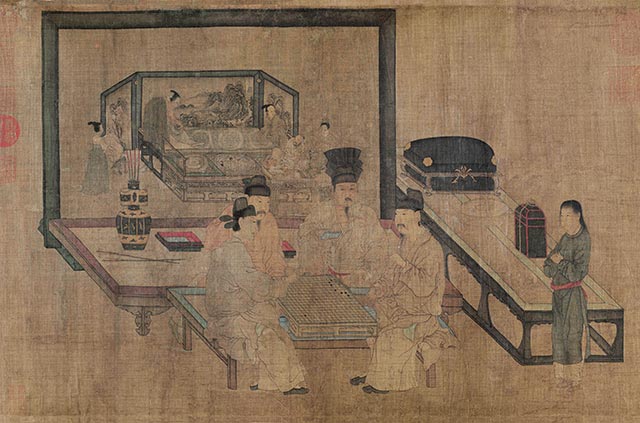 This scene depicts Li Jing, emperor of the Southern Tang Dynasty, playing chess in front of a screen with his three younger brothers. The players are completely focused on their game, appearing quiet and lifelike. Because the image of a screen is drawn on the screen in the background, it is called a “repeating screen.” Emperor Li Jing loved the art of painting and often summoned painters to feasts to depict the life of the royal family in art and poetry.

Zhou Wenju hailed from Jurong (now Jurong City, Jiangsu Province). He was a painter of the Southern Tang during the Five Dynasties period. He was a court painter in the middle of Sheng Yuan’s reign, and during Hou Zhu’s reign, he worked in the imperial academy. His paintings include Buddhist images, figures, horse and carriages, wooden structures, and landscapes, but he was particularly skilled at figure paintings of court ladies. Taking the aristocratic life of the palace as his main theme, his style was similar to Zhou Fang’s, although far bolder.