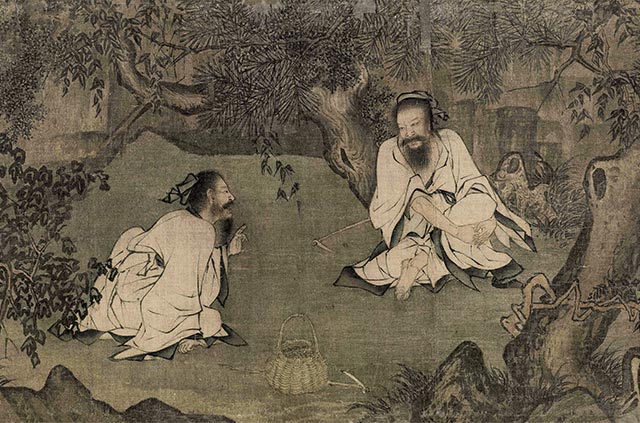 This piece was drawn according to the story recorded in the “Historical Records, Collected Biographies of Bo Yi,” which told of how Bo Yi and Shu Qi did not want to eat anything grown from the soil of the Zhou Dynasty. The picture shows the pair sitting face to face atop Shouyang Mountain.

Bo Yi sits with his arms wrapped around his knees, his eyes bright, looking resolute and calm. Shu Qi leans forward, expressing a willingness to follow.

The men’s faces are thin, and they are physically weak. Having lived in the wild, hungry and with nothing but wild vegetables to eat, they have endured great physical suffering. Even so, their spirits are intact.

Li Tang (1066–1150), known also by the courtesy name Xi Gu, was born in Heyang Sancheng (now Meng County, Henan Province). In his early days, he sold paintings for a living, then later entered the Song Emperor Huizong’s painting academy. Renowned for his loyalty after the South crossing, he worked at the painting academy, where he excelled at landscape paintings. Changing the rules set down by Jing Hao and Fan Kuan, he pursued a simple, vigorous style full of momentum, opening the way for Southern Song Dynasty ink paintings that were vibrant and direct. In his later years, his style was simple. Using the tip of his brush, he created a type of “ax-cut” stroke, which was ideal for painting water, creating the effect of turbulence.

He is known as one of the Four Great Artists of the Southern Song, alongside Liu Songnian, Ma Yuan, and Xia Kui.