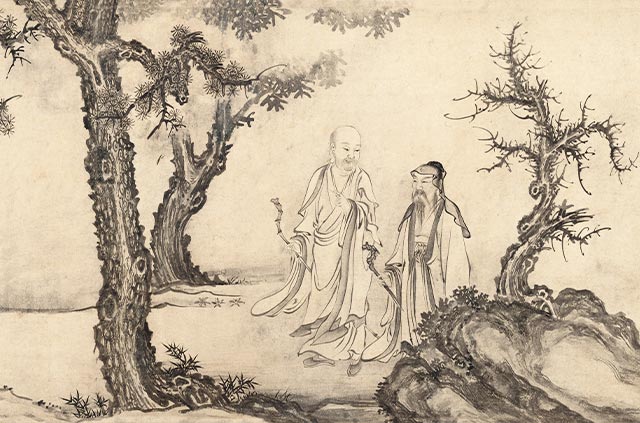 The painting recounts the story of Master Huiyuan of the Eastern Jin Dynasty establishing the White Lotus Society in the Donglin Temple at Mount Lu. The White Lotus Society was a social organization that originated from the doctrines of ancient Chinese religion. The teachings of the Society included paying respect to the Buddha, chanting scriptures, and pursuing the afterlife in the Buddhist Pure Land in the west. Because the white lotus serves as a symbol of the Buddhist Nirvana, and there is a lotus pond at the Donglin Temple, the society was named for the white lotus growing there.

In painting the figures, Zhang adopted the classical line drawing style, which produced lively images. In painting the rocks, he first outlined the basic composition with ink then applied texture strokes, reflecting a perfect balance between dark and light and presenting the depth of the gorge, the serenity of the path, and the steepness of the rocks. In painting the trees, he used thick brushes for the trunks and thin brushes for the branches and leaves, in a style known as “falcon talons.” By applying such techniques, the trees are rendered vigorous yet graceful.

Zhang Ji was known by the aliases Tou Zi and Tou Zi Tong Sou. The dates of his birth and death remain unknown. He was an active painter during the reigns of Northern Song Emperors Zhe and Hui, slightly later than the era of his uncle Li Gonglin. He excelled at painting figures, Buddhist subjects, and landscapes. Zhang’s painting style was influenced by Li Gonglin. His painting The White Lotus Society is one of his only works to survive.