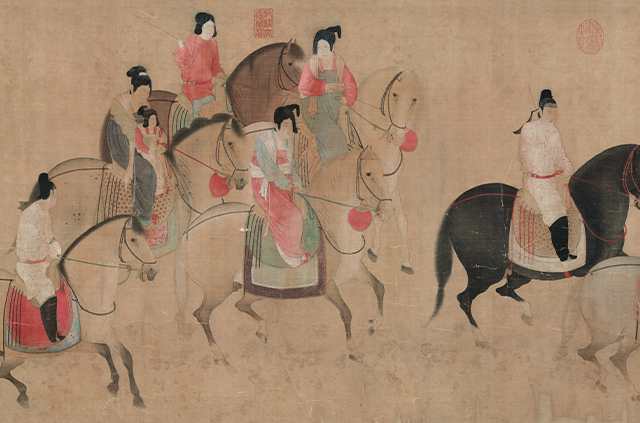 Depicting a scene from the Tianbao period, this image shows the Tang Emperor Xuanzong’s favored concubine Yang Yuhuan’s sister, Lady of Guo State, and her attendants on a spring outing. The people and horses have little momentum, and it seems they are riding slowly. The details are realistic, and the brushstrokes are impressive. The horses’ liveries and saddles and the people’s clothes are all typical fashions of the golden age of the Tang Dynasty, depicting the life of leisure enjoyed by upper class women of that time.

Zhang Xuan, born in Jingzhao (in present day Xi’an, Shaanxi Province), was a Tang Dynasty painter. During the Kaiyuan reign, he was appointed painter of the national archives. Known for his noble ladies, palace horses, and gardens of officials, he is usually mentioned alongside another painter of noble ladies, Zhou Fang. Dozens of works by Zhang Xuan are recorded in Tang and Song histories, but none are currently extant. The two most important copies of Zhang’s work that have been handed down were said to have been drawn by the Song Dynasty Emperor Huizong.