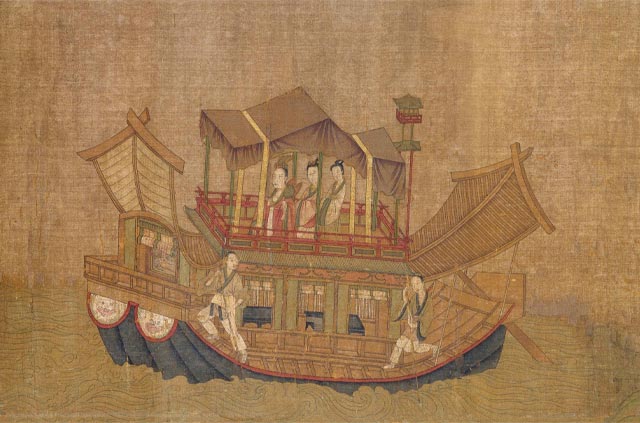 This scroll inspired by Cao Zhi’s “Ode to the Nymph of the Luo River,” a poem from the Three Kingdoms period that describes the admiration Cao held for the Nymph, and expresses the melancholy feeling caused by the insurmountable divide between the goddess and the mortal.

The scroll repeatedly depicts the same group of main characters in different scenes, using rocks, trees, and streams to divide each scene. Through this approach, the painting is simultaneously segmented and continuous. Rendered in exquisite, vigorous, yet unadorned lines and color washes resembling the threads produced by silkworms in spring, the brightly colored scroll features a painting technique known as “kong gou wu cun,” used mainly in depicting landscapes, especially of mountains and rocks. The technique is used here to paint mountains, streams, trees, and rocks. Later generations have commented that in the scroll, “figures and boats are disproportionately large compared to the mountains and rivers.”

Gu Kaizhi (c. AD 345–409), known by the aliases Changkang and Hutou, was born in Wuxi during the Eastern Jin Dynasty. He was erudite and talented, good at calligraphy and poetry, and especially adept at painting. He was said to have been perfect at “painting, literary composition, and foolishness.” He is known as one of the Four Great Painters of the Six Dynasties, alongside Cao Buxing, Lu Tanwei, and Zhang Sengyou. He wrote three books on painting, entitled On Painting, Introduction to Famous Paintings of the Wei and Jin Dynasties, and Records on Painting Yuntai Mountain. He proposed several theories of painting, such as “inspirational creation based on associative thought” and “expressing spirit through form,” which had a profound influence on later generations of Chinese painters.