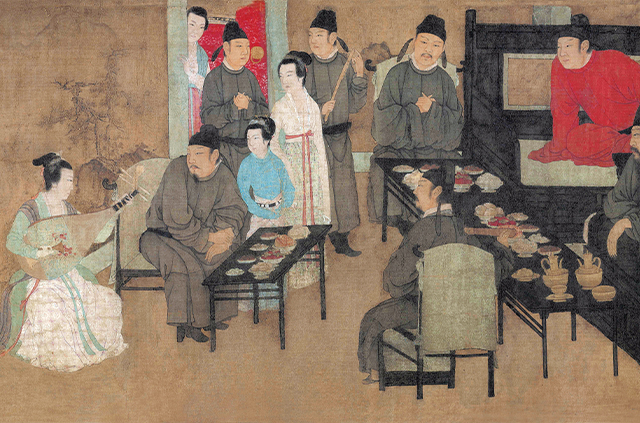 This painting depicts the life of a Southern Tang official, Han Xizai. The work breaks up the concept of time through the use of panels, an office desk, musical instruments, and day beds. The five scenes (listening to music, watching a dance performance, resting, playing musical instruments, and saying farewell) are well positioned in a single painting.

In this reproduction of the refinement and elegance of the lifestyle of the Southern Tang literati, it is almost impossible to hide the despondency and emotion Han Xizai feels toward political life. It is a successful portrayal of his complex mood.

Gu Hongzhong was a Southern Tang painter from the Jiangnan region during the Five Dynasties period. He served as a court painter for the late Southern Tang Emperor Li Yu. Renowned as the portrait artist who painted Emperor Li Yu, he was proficient at figure painting, using strong, round brushstrokes alternating with square strokes. The lustrous colors with which he portrayed facial expressions and states of mind were as well-known as those of Zhou Wenju. His most famous work is Night Revels of Han Xizai.